Yahoo.com is a multinational website that can be access in many different languages around the world. It is an Internet corporation with its headquarters located in Sunnyvale, California. There are many different services offered by Yahoo.com. The company is into video sharing, advertising, email service, search engine, finance, news, online mapping and web portal. 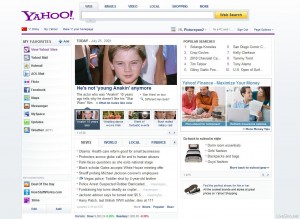 Yahoo.com: a popular site around the world

Yahoo.com is certainly one of the most visited site not only in the United States but around the world. Every months, the site receives not less than 700 million visitors. The company was originally started by Jerry Yang and David Filo. It was founded in January 1994 and turned into a corporation one year later.

Yahoo.com had a glorious past on the Internet but with the rise of the search engine Google and the social network Facebook, the company started struggling to keep it users. In 2012, the company managed to snatched a key employee from Google and turn her into a CEO. That. is Marissa Mayer. As soon as she took her new role, she started implementing certain new policies that would hopefully revive Yahoo.com and push it ahead of its competitors.

By July 2013, statistics from ComScore suggest that Yahoo.com has again surpassed Google when it comes to the number of visitors they receive from the United states.